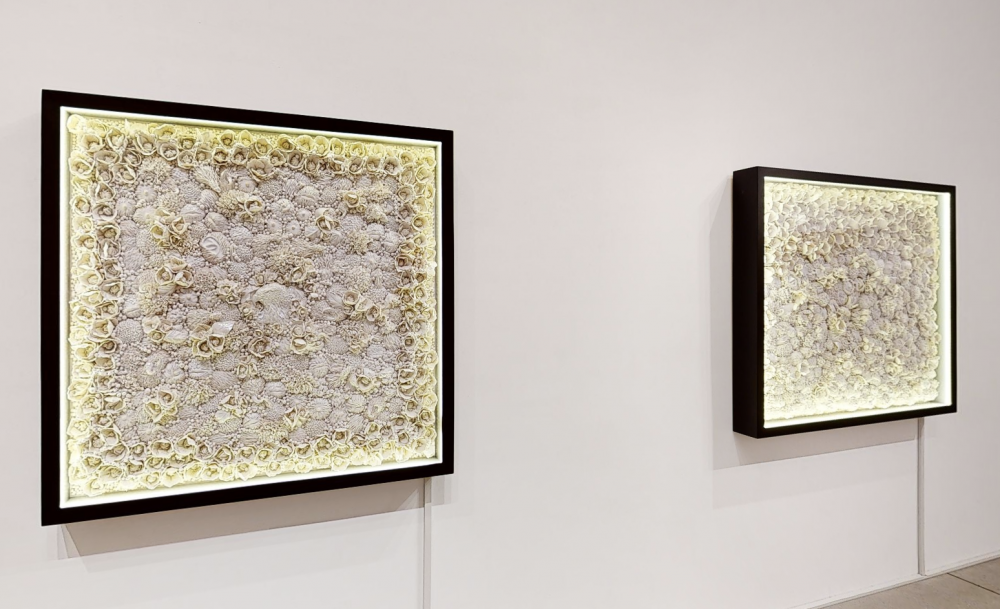 Leila Heller Gallery is pleased to present Melis Buyruk’s debut in the UAE, with the solo show “Habitat,” on view from January 20th to March 12th 2020. The exhibition showcases nine porcelain works by Buyruk, where a ceramic topography of intricate flora and fauna are encased in wooden boxes, and granted their own habitat. In a mastery of porcelain, the traditionally feminized and overlooked art form associated with domestic life is reinterpreted as a medium that points to bio-futurist tensions.

Today is the 33rd day of my self-imposed quarantine. I haven't left the house in 33 days, except for the occasional grocery run, and daily dog walks. As of yet, Turkey has not implemented a curfew, but the government has issued guidelines for essential workers - those who are obliged to work, such as workers in healthcare, service and production. I am of the lucky few who can stay at home, and yet continue to work. About 6 months ago, I brought my studio into my home, moving it to the ground floor, which is in a very residential and quiet part of Istanbul. It makes my studio very silent, allowing me to be more mindful and productive  Every morning, before I start working in my studio, I have my cup of coffee while listening to the pianist Yiruma at my little garden. The quarantine reinforces my regular routine, allowing me to continue working on a series of new projects for my upcoming exhibition at Leila Heller Gallery.

I think the pandemic, having impacted the entire world, has allowed us to listen to ourselves. Before our global shutdown, “I don’t have the time” would be all-too-common phrase, and we would not allow ourselves to engage in activities or things that didn’t have an immediate sense of value. And now everything has stopped, all of a sudden. No longer do we try to not miss out on anything.There is nothing to “catch up” with.

Regardless of who one may be, we are all helplessly prone to this virus. We are undergoing this crisis collectively, where our interdependency is more transparent than ever. This has led me to begin thinking about once-utopian words and concepts such as “humanity” that draw on the universality of this issue. So, I’m not too pessimistic. I believe that empathy and our understanding of social responsibility will be the biggest factor in achieving a worldwide recovery. There will indeed be radical changes in our lives, both good and bad, but we will adapt, and continue.

Q&A WITH THE ARTIST

LHG: What initially inspired you to begin making art?
MB: I would say I began to make art when I was playing with dolls as a child. I started to create things for them - sewing clothes, shoes and accessories, as well as attempting to build houses with things I found around the house. This led me to begin painting the walls of our own, life-size house, which was not so amusing for my mother.

LHG: In your habitat series, you created a ceramic topography of hybrid plants, animals, and human body parts. What drew you to the motifs of flora and fauna?
MB: I began to engage with these organic forms, after mediating on the relationship of humankind with nature, and our current inclination of irreversibly harming the environment. As an alternative to this act of destroying, I wanted to create something new, and create spaces where all species live together without hierarchy. Therefore, my work is very much informed by Darwinian processes of evolution.

LHG: The series is also entirely monochromatic. Why leave the porcelain unpainted?
MB: I feel the use of color, particularly when working with depictions of the natural world, dictates meaning. I like to avoid using descriptive elements such as color. I also prefer to encourage the spectator to immersive themselves into the work, and get lost in the details, discovering something new with each viewing. Using color would separate forms more succinctly, and I am interested in non-hierarchical hybridity.

LHG: What advice would you give to the next generation of young artists?
MB: Regardless of what happens, do not lose your motivation. Never stop creating and more importantly, critically thinking about our world. Discipline and devotion will surely bring success.

LHG: Many of the animals you use in your art, such as the snake, rat, dragon are part of Chinese Zodiac. Was this an intended reference?
MB: I actually chose these animals on the basis of the fear that they biologically instill in humans. Certain animals pose a serious threat to human evolution, which has been engraved in our DNA. We find some animals uncomfortable or frightening because their shape or color, causing us to negatively and incur a “flight” response. I wanted to juxtapose our age-old, biologically rendered fear against our socially conditioned admiration for flowers, and position them together.

LHG: How do you think art can impact people in these dark times?
MB: Within the walls of our homes, we have once again realized that the only thing that makes life meaningful and beautiful is art. What would life be like in quarantine without online exhibitions, music, movies, literature? Yesterday I watched Andrea Bocelli's emotional concert "Music for Hope" live -  together with millions of people around the world at the same time under the same conditions. Such an event could only be possible with art.

LHG: How has the current global pandemic impacted you personally as an artist?
MB: Luckily, I had merged my studio and home some time ago, so my quarantine routine  is not so different from my regular routine. I am, however, much less distracted and continue to work. Instead of focusing on the future, and worrying about postponed or canceled exhibitions, I try to take advantage of this situation and channel that energy into my work. The Habitat series covered the hierarchy between species and offered a critical view of the world dominated by humankind. What we experienced during the pandemic process enabled us to face the weaknesses of the human species again. This crisis strongly relates to my work, and so I am particularly focused on my upcoming projects with Leila Heller Gallery.