RADIO OPEN SOURCE: GANZEER IN AMERICA - GET THE JOKE? CAN WE TAKE IT?

FLAVORPILL: SEEING THE US THROUGH THE EYES OF AN IRREVERENT EGYPTIAN ARTIST

AHRAM ONLINE: EGYPT'S ARTS AND CULTURE: THE BEST OF JANUARY 2015

ANIMAL: THE BANKSY OF EGYPT - GANZEER GOES "ALL AMERICAN"

THE SOUND OF ART: MOMENTO - THE ALL AMERICAN ART OPENING

THE NATION: EGYPT'S REVOLUTIONARY ARTIST TAKES ON THE NYPD

Leila Heller Gallery is pleased to announce “All American By Ganzeer,” the first solo exhibition in the United States of Ganzeer on view from January 16 – February 21, 2015 at 568 West 25th Street. A reception for the artist will take place Friday, January 16, 2015 from 6PM-8PM. “All American By Ganzeer” is curated by Dr. Shiva Balaghi, one of the world’s foremost scholars of contemporary art from the Middle East.

For his Leila Heller Gallery debut, the artist has assembled over 80 screen prints and acrylics that deliver a visual commentary on life in America today. The imagery represents a bold reimagination of contemporary urban symbols and icons. Ganzeer takes over the gallery’s Eleventh Avenue windows to install a work that hearkens back to his roots creating art in the streets of Cairo. Working on an array of media (paper, canvas, wood, and video) the artist  presents a view of America that Dr. Balaghi describes as “a playful and sometimes disturbing look at the quotidian and the political” and “a visual diary of Ganzeer’s first experience of living in the U.S.”

Resolutely political and populist, the artist came to international prominence during the 2011 Egyptian uprisings that led to the fall of the Mubarak regime. His military defiant imagery became a visual reference for many, for the historical moment in the country. A graphic designer by training, Ganzeer’s name (bicycle chain in English) reflects his firm belief that artists should be agents for change and his work in Egypt along with exhibitions across the globe clearly reflect this. He has proven adept at mastering a number of techniques in his ongoing effort to explain the places and people where he has!lived. Critic and author Carlo McCormick has described him as “a chameleon and adapts his visuals to the content.”

Ganzeer is the pseudonym of an Egyptian artist. He is not an author, comic book artist, installation artist, painter, speaker, street artist, or videographer, though he has assumed these roles in a number of places around the world. His art has been shown in Bahrain, Belgium, Brazil, Canada, Finland, Germany, Jordan, the  Netherlands, Switzerland, United Arab Emirates, and the United States, as well as in myriad Cairo galleries. The Huffington Post has ranked him among the top 25 street artists currently shaking up public art. 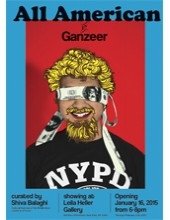