Leila Heller Gallery is pleased to announce a new exhibition by Arthur Carter, Reflections on Form: Sculptures, Paintings and Drawings, on view from March 31st — April 30 th, 2016 at 568 West 25th Street. Pursuing his inquiry into the use of geometry in his practice, for the past twenty-five years Arthur Carter has engaged in a fully intellectual, sophisticated style, merging his mathematical precision and musical interest, with investigations of complex relationships between objects. Hilton Kramer defined the artist’s sculptural practice in terms of language: ‘Geometry is to the artist what grammar is to the writer’. A definitive monograph Arthur Carter: The Geometry of Passion, published by Abrams will accompany this exhibition.

Where drawing meets air, Arthur Carter’s sculpture takes place.  Mining at once the visual vocabulary of modernist abstract composition as well as the depth of mathematical mysteries, Carter’s work continues the tradition of New Sculpture, often called ‘drawing in air’, in works such as Elliptyk (1999), wherein the verticality of the seven bronze ellipses suggests a Constructivist aesthetic, pointing towards the artist’s vocabulary of circles, spirals, arcs and ellipses. If mathematics defines the universal language of existence, then the cursive syntax of Carter’s most recent sculptural works, rendered in elegant rectilinear forms of sanded bronze, present a slender spatial calculus.

Building upon experimentation in previous works exploring the universal relationship between the ancient Fibonacci sequence and the aesthetic geometry of the golden ratio, such as the wall mounted reliefs Orthogonal Construction 7 (2009) and Aluminum Elements Spaced According to Fibonacci (2008), Carter challenges the structures of the physical world with his own modernist interventions, like new words in a language of space-time. Of the canon of mathematical enigma, Carter does not overlook the non-Euclidean Mobius strip, embodied in his sinewy representations, Continual Elliptical Loops (2005) and (2000), composed of a ribbon of stainless steel, crossing itself a half dozen times upward, around, back again—to its base, along edges—bearing uncanny resemblance to a sort of writing: scribblings in metal. Meanwhile, for Mathematika II (2008), the artist renders an angular exploration of Pythorgas’s theorem, in bronze. In Carter’s sculptural practice, space does surround the object, but is surrounded by it.  Volumes, curvatures, and an opposition of angles: ‘Only squares and circles, lines and ellipses,’ says Carter, ‘can elegantly explain and simplify the complex meaning of life.’

Yet this exhibition not only addresses Arthur Carter’s latest pieces—his products—but also the artist’s sophisticated intellectual process—including a selection of Carter’s preparatory drawings as well presenting the polymath’s pieces before a background of his artistic interlocutors.  Indeed, the exhibition seeks to establish Carter’s work within a larger art historical context by presenting a dialogue between the artist and his main influences: Modernist masters-such as Naum Gabo, Aleksander Rodchenko, Piet Mondrian, Alexander Liberman, George Rickey and Fernand Léger-in addition to philosophers, mathematicians, and composers. Noted works by Rudolf Bauer, Burgoyne Diller, Alexander Calder, Jean Metzinger, and Ilya Bolotowsky will engage the viewer in providing parallels between the two-dimensional linear and square planes of the canvases and the hard edge or circular volumes of the sculptures.

Arthur Carter was born on December 24,1931, in New York City. Trained as a classical pianist, he continued his studies in French literature at Brown University and graduated in 1953.  With a prior career as a journalist and publisher, Carter founded the Litchfield County Times in 1981 and the New York Observer in 1987. Over time, Carter began to convert the grids and geometries associated with the printed page from two dimensions to three, using stainless steel. Arthur Carter’s career as a sculptor became the latest major statement of his polymath proclivities, with a number of sculptures on permanent public display in New York City. Arthur Carter has been a featured solo artist at many galleries, including the Tennessee State Museum in Nashville, the Grey Art Gallery and 80WSE Galleries at New York University in New York City, The Southampton Art Center, Galerie Piltzer in Paris and the New Britain Museum of American Art in New Britain, Connecticut. He lives and works in New York and Connecticut. 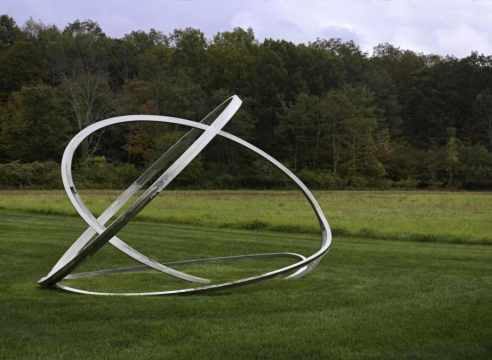 Publisher Arthur Carter on His New Career in the Art World