MASQUERADE: IN TRIBUTE TO FARIDEH LASHAI

ART OF THE TIMES

Leila Heller Gallery and Edward Tyler Nahem Fine Art (ETNFA) are pleased to present two posthumous New York exhibitions celebrating the life and career of internationally renowned, recently deceased, Iranian artist Farideh Lashai (1944 – 2013). On view, from April 3 to May 7, at ETNFA will be works such as El Amal, 2011 - 2012, Le Dejeuner au Park-e-Mellat, 2007 - 2011, among others. An extended version of Lashai’s work Rabbit in Wonderland, 2010, will be on view at Leila Heller Gallery from April 4 to May 2. A joint-gallery catalogue, featuring an essay by Negar Azimi, Senior Editor of Bidoun magazine, will be published to accompany the exhibitions.

Through her dynamic paintings and videos, Farideh Lashai, who began exhibiting her work internationally in numerous solo and group exhibitions in 1968, created a compelling Iranian aesthetic in contemporary Middle Eastern art, inspiring artists at home and abroad. During her career, Lashai captivated viewers with her works, which seem to inhabit an ephemeral reality akin to the actual shifts of events through time and space. Lashai’s amalgamated use of layered mediums such as video, paintings, and sound, brings to life transient movements of iconic figures and other characters projected upon striking paintings of nature. Her intricate use of projected videos and sound upon unique paintings function as a cohesive whole and awaken a universal sense of nostalgia.

The main gallery at ETNFA will feature two large connected works of art with projected animation and sound. El Amal, 2011, inspired by the Arab spring and the Egyptian revolt, is a projection in which Charlie Chaplin appears in a scene of The Great Dictator. The face of Um Kalthoum, the Grande Dame of Arab music, rises on top of the painting, majestic as a moon with her renowned emerald earrings hanging. The eyes of the singer are closed, as if she is ignoring the minuscule dictator under her watch, dancing in excitement to the tune of her song "El Amal", meaning “hope, desire” in Arabic.

This work is directly related to the second installation on view, When I count, there are only you…But when I look, there is only a shadow, 2013, which features 80 etchings based of Goya’s Disasters of War series from which all of the violent figures and actions have been removed, leaving only Goya’s backgrounds from each scene. These are then illuminated by a floating ball of light from El Amal. This work is about the reminiscence of violence and atrocity, a horrific event in a specific location (Spain’s invasion by the French), yet which is universally understood by those who have experienced war, or in the case of Iran, violent regime change that erases all memory or traces of the past. In this work, it is the recognizable background of Goya’s etchings that maintains the cultural memory even as the actors upon it change or disappear.

Leila Heller Gallery will devote its entire exhibition space to Lashai’s Rabbit in Wonderland, the multiIlayered painting, sound and video masterpiece inspired in part by Lewis Carroll’s Alice in Wonderland and consisting of seven works (Catching the Moon; Prelude to Alice in Wonderland; I Come from the Land of Ideology; Gone Down the Rabbit Hole; Dear, Dear! How Queer Everything is Today; Keep you Interior Empty of Food That you Mayest Behold Therein the Light of Interior, The Mad Majlis) depicting the metaphoric unfolding and subsequent disillusionment of various ideologies that entered Iranian society in the 20th century. While referencing key political figures and events, this series stresses the struggles of the Iranian nation as its people navigated this volatile epoch in their country’s history. Her search for meaning in identity and self are revealed by embarking on a journey through these competing political and intellectual voices of dissonance. 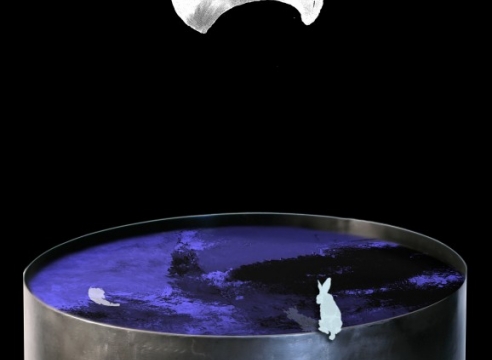 The Estate of Farideh Lashai