Leila Heller Gallery Dubai is pleased to present a selection of large-scale paintings by Gordon Cheung in his first solo exhibition in Dubai. Lines in the Sand seeks to continue the artist’s critique of the shifting boundaries of the empires of global capitalism: demarcations of nation, territory, or trade route as much the product of myth as mapmaking, but nonetheless with real material effects. Sand serves as a powerful and pervasive metaphor within Cheung’s practice, invoking the cyclical temporality by which empires rise and fall.

History is written by the victors; empire erases the voice of the vanquished. Painted upon the substrate of Financial Times stock listing—which serve as the material ‘background’ and visual ‘unconscious’ upon which his historically weighted imagery rests—Cheung’s sprawling virtual landscapes and unearthly still life compositions map the geopolitical landscape.  Whether portraying maps of oil pipelines overlaid ISIS controlled areas with their national borders erased; or presenting images the South China Sea passageway, the maritime silk road which is worth $3 to $9 Trillion USD in trade never mind the oil and gas reserves under the contested areas, Cheung's paintings bring to the visual realm current international contestations, seeking to mine the drama of power and oppression engendered by the rise of global capitalism and neo-imperialist paradigms—east and west.

The course of empire, however, in Cheung’s work, is not only past and present, but also future. A Thousand Plateaus (2016), makes direct reference to the critique of contemporary capitalist culture by Gilles Deleuze and Felix Guattari of the same name, and borrows from the aesthetic of Chinese landscape, interrupted by the image of a ‘nail-house’ an isolated hut standing high on a mound, relate not only to the resistance of industrial development for the means of economic growth, but also subvert the original notion of a pagoda as a place for spiritual retreat.

This cross-historical depth is met by a certain, scrutable violence in the profound references and layered composition of Cheung’s mis-en-scenes. In Promised Land (2009), drawing upon the importance of science fiction to the artist’s work, at the center of the image stands the figure of a ‘pre-dawn’ man, borrowed from iconography of Stanley Kubrick’s 2001: A Space Odyssey. Cheung explains, “pre-dawn man has understood the power of violence and by exerting it, it can control the ‘pool of life’ and secure survival for his tribe.” The artist’s reference to this prehistoric domination as well as filmography occurs within a Technicolor landscape, suggesting, “the evolution of pre-dawn man to space age man is intertwined with violence.”

Like the undercurrent of numerical data that cascades down upon the grounds of Cheung’s works – through the now trademark use of Financial Times stock listings – his Minotaur series contain a wealth of (monetary and mythological) references to current and historical global economies, moreover their unstable and volatile nature. In Shock and Awe (2016) the ‘bull’ (rise) and ‘bear’ (fall) years of the stock market are represented as rodeo riders who dance across Martian, barren landscapes, encapsulating an economic metaphor and our relationship to the animal kingdom and land. As Jean-Paul Stonard states, “Where Blake saw the world in a grain of sand, Cheung sees the fate of individuals in the face of the great drifts and dunes of civilisation.” 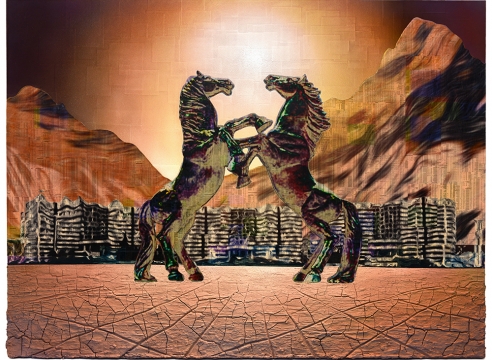 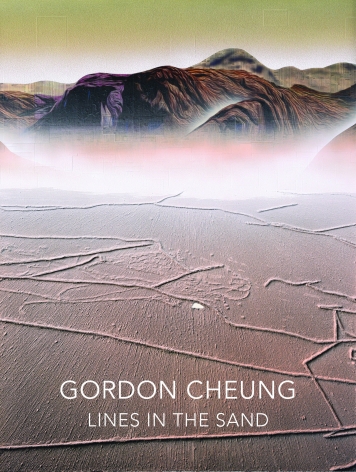 As UAE art scene gears up for a new season, here are the highlights to look forward to