Leila Heller Gallery is proud to present The Eclipse, an exhibition of new work presenting the artist’s strategies over a twenty-year career. Addressing the visual discourse of the post human, Hashimoto’s oeuvre also critically engages in the post digital landscape with at once strategies of the sublime and whimsy: interrogating, interrupting, and inventing contemporary extensions of space, through his own carefully legible grammar of artifice and perception.

Trees, clouds, grass, sky: everything dies, except in the art of Hashimoto, whose gesture toward landscape only underlies the artifice of its form and the viewer’s contemporary alienation from its function. The artist seeks to uncover the underlying prismatic influence of the technological on our contemporary understanding of the tipsy threshold between the natural and artificial within digitalization of experience. This emergent and immersive encounter between humanity and technology has been termed elsewhere, the replacement of the ‘world of objects with the world of screens’. What the artist defines as “an extension of ways of considering space,” through a poetics of polyphonies, often patterned, saturated forms—installations and wall reliefs composed in a multitude of lightweight rice paper elements—derives from a consideration of the parallel landscapes presented by the instantaneous, simultaneous video gaming terrain crossed with the analog fantasy of cold war sci-fi cinematic optimism. Like them, Hashimoto’s sculptural and visual propositions use old forms to create new worlds: the collapse of landscapes collapsed upon landscapes collapsed upon themselves.

Hashimoto’s “formal, conceptual intersection between the digital production modes and the analog physicality of sculpture” is one which has preoccupied Hashimoto for over 10 years, as he follows, it is “fundamental to the development of artists in my generation—a generation that spans the vinyl and compact disk generation that learned to type on manual typewriters, who bought records and tapes and went to college with CDs”—but now mediating their relationship through iPhones, Google Earth, and social networks. Turning away from dualism, it is intersection then rather than opposition which interests Hashimoto. Like Donna Haraway’s theory of the post-human in her Cyborg Manifesto, the viewer beset with the longing of Hashimoto’s generation “would not recognize the Garden of Eden;” his figures of landscape as artifice, whether Digital Space Paintings, Infinite Expanse of Sky, of Tree Three—even as they often employ natural forms or an ‘analog aesthetic’—are “not made of mud and cannot dream of returning to dust.”

For Leila Heller Gallery Dubai, Hashimoto presents, as the central work of the exhibition, The Eclipse (2017), a monumental installation composed of an overwhelming cloud of black bamboo and rice paper billowing forms, first presented at the Palazzo Flangini for the 57th Venice Biennale. Contrasting gravity and levity, the work has been called by Luca Massimo Barbero, a ‘threshold’, “an opening, as access to another place, probably to another possible condition.” Like Hashimoto’s often but not always patterned, serial, resuscitation of the vestiges of the rectilinear grid, The Eclipse (2017) speaks to the end of a way of seeing, which, like history and its last man, is also not the end.

Jacob Hashimoto was born in Greeley, Colorado in 1973 and is a graduate of The School of the Art Institute of Chicago. He lives and works in Queens, New York. Hashimoto has been featured in solo museum exhibitions at MOCA Pacific Design Center in Los Angeles, MACRO Museum of Contemporary Art in Rome, Fondazione Querini Stampalia in Venice, LACMA - Los Angeles County Museum of Art, Schauwerk Sindlefingen in Germany, and the Wäinö Aaltonen Museum of Art in Finland. He has also had solo shows at Mary Boone Gallery in New York, Rhona Hoffman Gallery in Chicago, Studio la Città in Verona, Galerie Forsblom in Helsinki and Anglim Gilbert Gallery in San Francisco, among others. His work is in the collections of LACMA - Los Angeles County Museum of Art, EMMA - Saastamoinen Foundation, Schauwerk Sindelfingen, The California Endowment, and numerous other public collections 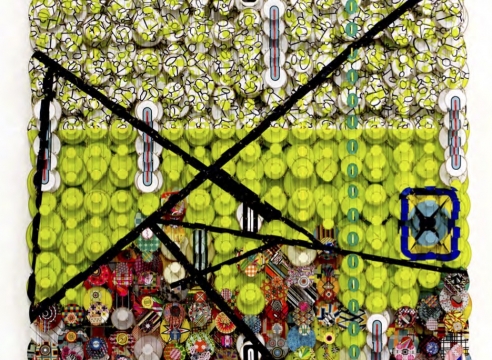 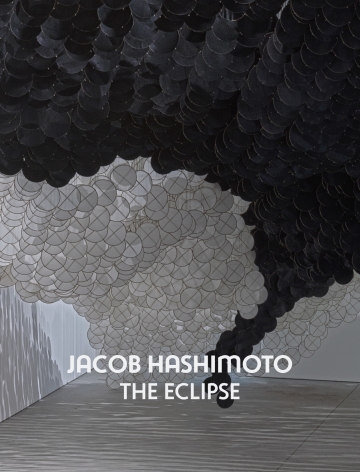 Jacob Hashimoto - THE ART OF WORLDBUILDING