An exhibition of new politically charged work by Gayle Wells Mandle and Julia Mandle entitled GAME will be on view at LTMH Gallery from April 27 through May 20, 2011. Both artists unceasingly question the world through a lens focused on power struggles in the Middle East through their painting, sculpture, photography, and works on paper. Both are  American artists, mother, and daughter, living abroad – Gayle Wells Mandle in Qatar and Julia Mandle in Holland – which has sharpened their perspective on the American conflicts in the Arabic world.

Julia Mandle’s new installation of work relating to piñatas explores the dark side of a well-known children’s game. Lamiya's Last Game includes photographs, works on paper and fabric, and bronze and ceramic sculpture. Mandle’s body of work was inspired by a photograph of a young Iraqi girl’s body being prepared for burial taken by Stephanie Sinclair for the Chicago Tribune in 2003. In an uncanny coincidence, the opening date of exhibition marks the anniversary of Lamyia's death eight years ago. She was killed by a cluster bomb on April!27, 2003.

Piñatas originally were created for redemptive ceremonies whereby revelers would violently strike a ceramic seven-pointed star shape and wish for the sweet hereafter symbolized by the gifts contained within. Taken by the combination of brutality and naivety, Mandle builds on the  concept of piñatas to call attention to the youngest victims of America’s invasion of Iraq.

Julia Mandle is currently working in Amsterdam after 15 years in New York City. She is best known for her performance art, which highlights such issues as human rights, urban planning, and environmental issues. Her work has been shown/performed at The New Museum, Cooper-Hewitt National Design Museum, Cabinet, and Storefront for Art and Architecture. Media coverage has included The New York Times, Village Voice, Washington Post and White Wall Magazine.

Born in Pennsylvania, Gayle Wells Mandle has lived in Doha, Qatar since 2008. She earned her MFA in 1997 at the Rhode Island School of Design. Since then her work has been shown in numerous exhibitions in the U.S. including at the Addison/Ripley Fine Art in Washington D.C. GAME is her first major exhibition in New York City. In 2010, she curated Beyond the War, an acclaimed exhibition at LTMH Gallery of work by seven Iraqi artists. 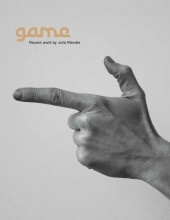