ART IN ASIA: THE SNOWFALL OF SPIDERS

ART OF THE TIMES: RAN HWANG - THE SNOWFALL OF SPIDERS

ARTSY EDITORIAL: BREATHTAKING MURALS & INSTALLATIONS MADE OF BUTTONS AND PINS

A solo show by Korean artist Ran Hwang will be on view at Leila Heller Gallery in Chelsea from February 20 – March 21, 2014. The exhibition will feature six new works that explore the cycle of life, death and rebirth. These new works, in shades of champagne golds, cherry reds, tiffany blues, and luminous silvers, are created from Hwang’s signature buttons, beads, and pins. Also on view will be a new monumental multimedia installation. A fully illustrated catalogue with an essay by art critic Eleanor Heartney will accompany the exhibition.

In her second solo exhibition at the Gallery, Hwang will explore the brevity and fragility of life. The blossoming and decaying of flowers, an urn – a vessel for remains, and a Buddha — the teacher of reincarnation, are common motifs in Hwang’s work. Eleanor Heartney writes in the catalogue essay, “In Hwang’s work, buttons and pins become so much more – in their subtle, trembling movement, they become metaphors for human freedom.”

Hwang will transform the main gallery into an interactive, virtual garden. Fifteen Plexiglas panels featuring cherry blossoms made of silver pins and vibrant paper buttons interlaced with delicate, sparkling crystal spider webs will be suspended from the ceiling. The panels are infused with a video projection of a snowy white forest, which morphs into red cherry blossoms that are then consumed by a scattering of black spiders. The work, an emblem for the circle of life, shows the transition from winter to spring, and the growth, evolution and ultimately death that accompany the seasonal transition.

Hwang’s motifs of blossoms, Buddha’s, and urns come from her preoccupation with Zen Buddhism. Additionally, Zen Buddhism plays a part in Hwang’s creative process. Creating hand-made paper buttons and hammering each pin approximately 25 times until it is secure are time-consuming tasks. The monotony and receptiveness of these actions require the utmost concentration and discipline, recalling the meditative state practiced by Zen masters.

Although Hwang refers to her Korean heritage by incorporating aspects of Zen Buddhism into her artist practice, she is also very much influenced by her time living in the United States. Heartney writes, “Buddhism is only part of Hwang’s heritage. As a Korean born woman who has lived in the United States since 1997, her consciousness is a mélange of influences, all of which mingle in her complexly layered work. She notes that while she was brought up in a Buddhist family, she had grown away from Buddhism until she witnessed the events of September 11, 2001. The sight of the burning buildings and falling bodies brought her back to questions of mortality, time and the fragility of life. It was after this experience that the Buddha began to appear in her work, taking his place among other less specifically Asian images. Reflecting on her big cultural consciousness, Hwang says, “I use Western objects with an Oriental mind.”

Born in the Republic of Korea in 1960, Ran Hwang lives and works in both Seoul and New York City. She studied at the School of Visual Arts in New York City and attended the Graduate School of Fine Arts at Chung-Ang University in Seoul. She has exhibited at several international institutions including the Queens Museum of Art, New York; The Hudson Valley Center for the Arts, New York; the Chelsea Art Museum, New York; The Seoul Arts Center Museum; and The Jeju Museum of Art, Jeju Island. Hwang’s work is also a part of numerous private and public collections including The Brooklyn Museum, New York; The Des Moines Center for the Arts, Iowa; The National Museum of Contemporary Art, Seoul; and The Hammond Museum, North Salem, NY. 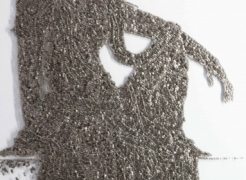