Widely considered to be the leading contemporary artist of his generation living in Pakistan, Rashid Rana first came to prominence with an energetic and productive representative of an entirely new kind of art from South Asia. He is known for developing a conceptually-driven art practice, one of which consists of a pixelated attention towards formal concerns using distinct imagery and pictorial strategies. His work in the last two decades portrays multiple modes of presentation, each time finding a freshness of purpose and inventiveness throughout his unique visual language.

In his practice (Transliteration Series), Rana transposes imagery from one time and place to another, through manipulation, repetition and rearrangement. His early photomontages superimposed lascivious imagery on to the silhouette of a burqa (Veil, 2004) and turned hundreds of graphic slaughterhouse snapshots into facsimiles of Persian rugs (Red Carpet, 2007). Rana’s telescoping of politics, civilizations and time also appears in three-dimensional works in the series Desperately Seeking Paradise (2007-2011) which splice Lahore’s humble streets and houses with the architectural promise of skyscrapers and the slick lines of Minimalism.

Rana’s splicing and stitching technique feels violent as it tears apart and reassemble photographs of canonical art historical and contemporary imagery. Utilising the grid structure, the artist scrambles the famous compositions and rearranges them into pixelated and codified puzzles. Collectively known as his Transliteration Series, Rana reimagines pre-existing imagery from art historical masterpieces to contemporary photography, each is transformed into digital fields of form and colour that he can play with. Rana’s technique of image-making is not simply a formal device: it is an act of subversion that literally breaks apart and puts together the original image in a manner that creates a new image telling a different story. The strategy creates intended and unintended pairings whereby pictorial language from a particular time and place in history finds itself reborn and re-examined through the lens of another set of spatial and temporal coordinates. The viewer is encouraged to use his/her own positionality to create an active reading site.

The rearrangement of the fragmented imagery is not random. Rana’s deliberate movement and placement of these pieces force space and time to collide and evoke new meanings. What is revealed are how these interconnections between space and time may disrupt the original viewing pleasure but, in doing so, create new scenarios to unfold. Indeed, we require a provocateur such as Rana to adapt what may seem to be playful strategies of dislocation to force these pasts to collide and to make new relationships for our present and future. While the originals are held in the Louvre in Paris and the National Gallery in London, Rana symbolically returns the images to the source of their creators, albeit visually distorted and temporally displaced in the process. The viewer takes center stage in the deconstruction, thus acts as the active disruptor in Rana’s transgression. In this Transliteration series, Rana does not simply translate the original imagery but rather uproots it from the classical and European contexts and violently drags it into the pixelated perspective of the contemporary global viewer. 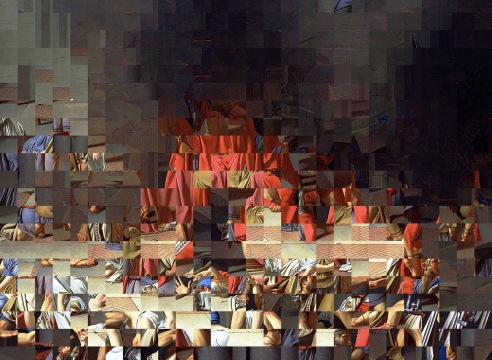 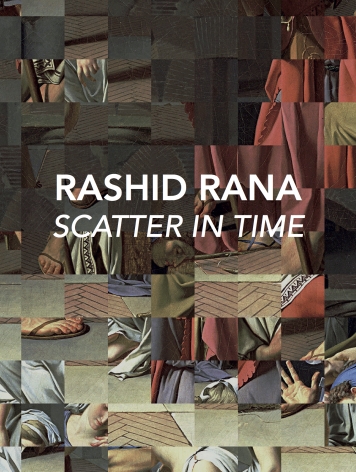