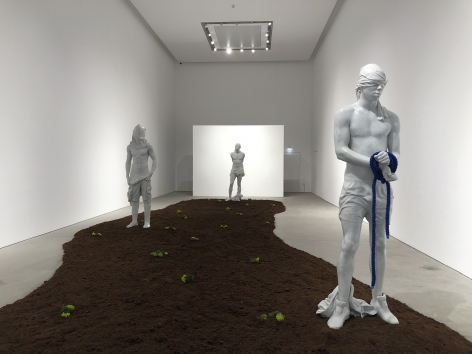 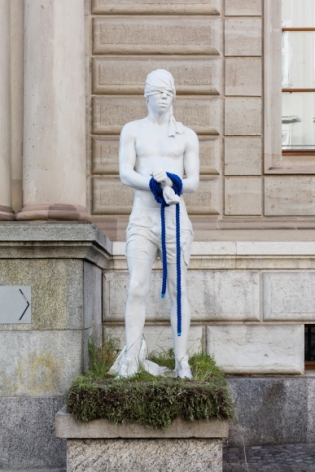 Leila Heller Gallery is pleased to present At 9:15 am Sunday 28 May 1967, Reza Aramesh’s second solo exhibition with the gallery. In titling this exhibition, Aramesh specifies the time and date of a particular event – leaving out the location. His choice of deliberate geographical ambiguity invites the viewer to be part of the intimacy of the scene, searching to acknowledge the commonality of human suffering whilst immortalizing an event or Action, as Aramesh titles them, of unnamed rebellious subjects. The exhibition features three bodies of sculptural work and continues upon Reza Aramesh’s interdisciplinary practice of representing the abjection of human bodies sustained during armed conflict and torture. Aramesh blends classical aesthetics with anonymous figures from the contemporary moment, thereby bringing to the fore the victims who have been rendered invisible, yet at the same time questioning the traditional representation of suffering throughout the Western art historical canon. While this reading of history has trained us to translate the suffering of iconic religious figures into martyrdom and therefore a noble calling, the overwhelming volume of mass media images of the everyday victims of war and violence has rendered us immune to these anonymous victims.

A young man stands, barefoot and without a shirt, his top wrapped around his waist. His left hand keeps the clothing in place at the same time, slightly pulls down the tracksuit bottom that creases around his legs. He is otherwise motionless. It is hard to avoid the association with a traditional iconography, that of the Ecce Homo, Behold the Man, the portrayal of Christ as he is presented to the crowds prior to His crucifixion. But unlike Christ in such scenes, this figure is deprived of his ability to act, even of his individuality, due to the paper bag that covers his head. Behold someone that once had the human rights of a man. Images of oppression and violence have been ubiquitous in Reza Aramesh’s work. This new sculpture, carved in marble, a material commonly reserved for celebratory purposes continues the artist’s multi-faceted explorations of the human ability to inflict suffering.

Reza Aramesh is a London-based Iranian artist born in Iran. He completed an MA in Fine Art from Goldsmiths University, London in 1997. He represented Iran at the 56th Edition of the Venice Biennale and has exhibited worldwide including UK, France, China, USA, Dubai, Israel and Iran. He has orchestrated a number of performances and exhibitions in institutions including the Barbican Centre, Tate Britain and ICA, London. Other projects have been staged in public squares, nightclubs and industrial warehouses. Working in photography, sculpture, video and performance, Reza Aramesh uses mass media imagery, typically of recent wars and armed conflicts as source material for a wide range ofworks, all of which he titles Actions. The artist uses the form of the study to discuss historical representations of suffering within the context of western art history.

Since its establishment over three decades ago in New York, Leila Heller Gallery has gained worldwide recognition as a pioneer in promoting creative dialogue and exchange between Western artists and Middle Eastern, Central and Southeast Asian artists. It has garnered a reputation for identifying and cultivating the careers of artists leaving a lasting impact on contemporary art and culture. Currently representing a diverse roster of Western and Middle Eastern artists, the gallery is also active in the American, European and Middle Eastern secondary art markets. In November 2015, Leila Heller Gallery opened its first international location in Dubai’s Alserkal Avenue. At 14,000 square feet, the state of the art gallery features three exhibition spaces, making it the largest gallery in the UAE. Showcasing leading regional and international artists, many of whom will be presenting their work in the Middle East for the first time, the gallery is dedicated to supporting the evolving practice of established artists.