Leila Heller Gallery Dubai is pleased to present an exhibition of new work by Ross Bleckner from April 29th to June 15th, 2016. The artist’s first major exhibition in the region features ten large-scale paintings as well as smaller canvases, wherein according to the artist, “the architecture of place meets the architecture of the sky”, revealing phenomena of paint and light, in an oeuvre teetering between a call for salvation and a silent abyss.

Ross Bleckner’s paintings are mediations on light: at once natural and artificial, an effect of and the very substance of the work. Often composing works replete with a pathos of loss, this light puncturing sheets of darkness represents a cautious optimism—a kind of hope—or an aesthetic of, as he states, “an idealistic dystopia.”  The artist continues, “it is about dredging … finding light through the darkness.”

It’s this philosophical query around the physical and the absent that animates Bleckner’s dome series. “The surface quality of the paintings,” he explains, “lets you look back into the world. It’s about the alchemy of the surface. The reality of it is somewhere in the paintings, but the configuration takes you away from that. There’s a tension between the materiality, the physicality, and the sublime.”

Central to the artist’s practice is a methodological layering of paint onto the canvas then scraping it away—a perpetual process of creating and editing, adding and subtraction. “I paint,” he explains, “the way one constructs a building.” He achieves a depth of color by slowly, gradually layering paint onto the canvas. The elimination of color is also central to Bleckner’s work. For example with his series of bird paintings, at one point in the creative process, the canvasses are entirely covered in paint—until Bleckner carves the birds out of the layers of paint. “So the birds are not actually there on the canvas. They are literally gone.”

This oscillation between the transcendental and the quotidian, illusionist space and the assertive presence of surface, the interruptive event of light and an encompassing blanket of dark contrast marks a speculative oeuvre wherein doubt and a questioning of the human condition in relation to the possibility of redemption or a divine is central. 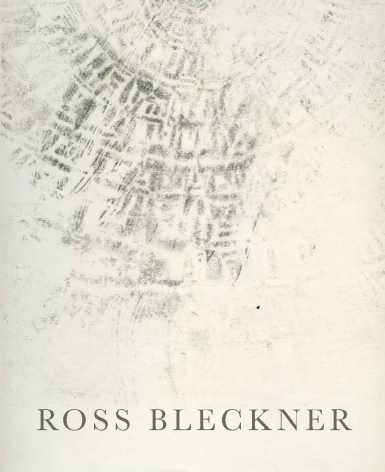