DUBAI, UAE – Leila Heller Gallery is pleased to present an exhibition of Malian photographer Seydou Keïta, drawn from a selection of his black and white portraits of the residents of Bamako, Mali from 1948 to 1960.  Originally executed by private commission and produced on an intimate scale—prêt-à-porter for his clients—these monumental renderings of the graphically stunning and psychologically engaging images of mid-century men and women presenting themselves before the camera reveal, according to Okwui Enwezor, the emergence of “subjectivities and desires in a modern and modernizing Africa.”

Although extant on the African continent from 1840, it was not until the early 20th century that the camera was made widely available by the technological revolution of the Kodak ‘brownie’ camera - which found its way into the hands of a young Seydou Keita in Bamako. He soon began professionally practicing photography and opened his own studio in 1948, when photography in West Africa, formerly under the strict cultural policies of direct French rule, became a vehicle for self-definition of a new, and distinctly modern, African subject. Keïta’s images portray individuals, outwardly displaying their own signs of class or self-identification, staring directly at the camera, on equal footing with the photographer, returning the gaze. These photographs, as Enwezor notes, “do not only render reality; they penetrate … it.  These portraits are archetypes, models for the way their sitters wanted to appear.  Their portrait is, therefore, the outcome of an elaborate constitutive process”—the constitution, that is, of a progressive, contemporary subjectivity—and thus society—in a time of social revolution in the transition towards postcolonial governance across the African continent.

Six works in the exhibition, Untitled, 1948-1954, share the same textile background and frame the sitter to reveal a rich variety of expressions. Whether it is a father sitting with his child to express a sense of pride in his new family, or a reticent woman with her arms clasped together looking off towards the future, or four women sitting together having tea, Keïta develops a rich aesthetic vocabulary through his portraits staged against painted backdrops juxtaposing the fabrics with signifiers of modern identity.

In a documentary by Brigitte Conrad made in 1998, just three years before Keita’s passing, he also alludes to the ways in which photography were influencing a specifically modern Muslim identity. He notes, “Because at that time, our great persona did not want to be photographed.  Religion had forbidden it then. They said a muslim should not make photos. But young people would not listen to this. They wanted to be photographed.” Yet at the same time, the style of dress, the headware, the prayer beads, so much of the physical content of these photographs references this meeting of Malian tradition and religion with an encroaching contemporary world view. Keita’s portraits silently capture this transition and forging of identity that was taking place across the African continent in the mid twentieth century.

Keïta’s archive of over 10,000 negatives were brought to light in the early 1990s and he has since received significant international recognition for his innovative and modern images.  His emphasis on the essential components of portrait photography—light, subject, framing—firmly establish Keïta amongst the twentieth-century masters of the genre. Seydou Keïta collector Jean Pigozzi goes as far as to say that he believes that Keïta “should be considered one of the greatest portrait photographers of the 20th century; on the same level as Richard Avedon, Irving Penn, and August Sander.” 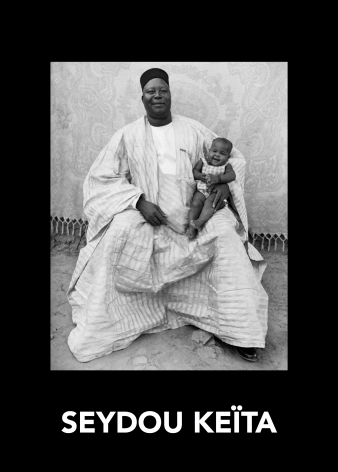 Five Dubai art shows to catch before it's too late

Portraits of a nation in transition