Leila Heller Gallery is pleased to announce, Broken Patterns, the first solo exhibition in the United States of artist Moataz Nasr, on view from October 29 – December 23, 2015. In addition to new installations, the show will feature iconic sculptural, mixed media, neon and video works from past series dealing with the re-imagining of pervasive socio-political and historical contexts in the Middle East. An illustrated catalogue with an essay by Dr. Shiva Balaghi will accompany the exhibition.

Showing complex cultural processes currently underway in the Islamic world, Nasr’s work surpasses idiosyncrasies and geographical limits by voicing the worries and torments of the region. The heightened anxiety currently underway is reflected in Nasr’s new work, Shattered Glass, a map of the Middle East consisting of layered broken glass. The feeling of belonging to a specific geopolitical and cultural context and the need to maintain a link with his homeland are key elements of his life and work. His practice is also concerned with portraying his native Egypt’s traditions, people, and colors through a conscious contextual framework. Art and life are inseparable for Nasr; his childhood memories, societal frustrations and the rich historical heritage of his region all fuel his practice.

Inspired by sacred Islamic geometric motifs, Nasr’s Arabesque and Khayameya series are comprised of thousands of colored matches. Directly referencing the history and traditions associated with Islamic architecture and Muslim artisanal heritage, he also alludes to regional instability that has recently ignited into political unrest. El Shaab (the People) is a reference to the Egyptian uprising that took place in January 2011. This work displays the diversity of his nation; showing people of varying ages, religious affiliations, and social classes, all joining forces in the name of freedom and justice.

As a symbol of strength, power and might, the lion is a recurring decorative feature of ancient Middle Eastern palaces: painted, sculpted or made from ceramics. Lion reliefs shielded pre‐Islamic palaces in Iraq and Iran evoking the virtues of their royal occupants. They also appear frequently in the work of Nasr, who, whether making the figures from matches with colored heads or with neon constructs an “oxymoron”: an animal of great strength and power depicted with highly volatile materials.

Through the use of various artistic mediums including, painting, sculpture, neon, and video, Nasr explores the complex cultural developments currently unfolding across the Islamic world. Through his practice, he attempts to move beyond geographical borders to emphasize the difficulties and injustices experienced by people all over the African continent and the Middle East.

Moataz Nasr was born in Alexandria and currently lives and works in Cairo, Egypt. A self-taught artist with an academic background in Economics, Nasr gained local recognition after receiving several awards, notably the Grand Prix at the International Cairo Biennial (2001). In 2008, Nasr founded Darb 1718, a contemporary art and culture center in Old Cairo. He has exhibited widely at institutions and biennials worldwide including at the Thessaloniki Biennale, Greece (2011); the Lubumbashi Biennial, Democratic Republic of the Congo; the Monash University Museum of Art (MUMA), Melbourne, Australia (2006); the Sharjah Biennial 7, UAE (2005); the Busan Biennale, South Korea (2004); the São Paulo Biennial, Brazil (2004); and the Venice Biennale, Italy (2003). 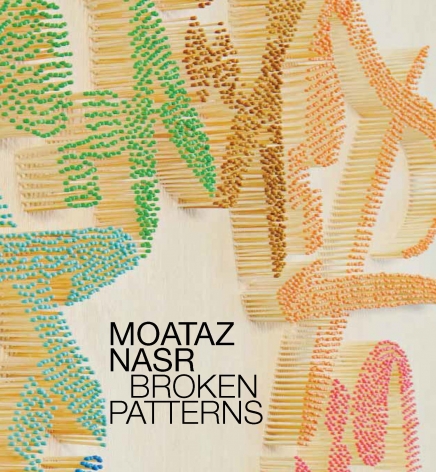